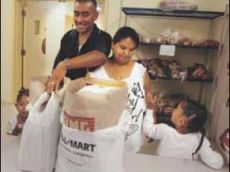 If you think that charities are not affected by the economic crisis these days then guess again. Remember, donations and contributions to which most charitable institutions rely on heavily come from the pockets of people who can spare and afford to support them. No thanks to inflation, even these people today are hit by hard times of high prices, cutting down on expenses and of course charitable contributions.

Charities are totally helpless in this aspect. Donating to charity is not a demandable thing. They are done out of voluntary will and for the people who used to do this, how can they if they themselves cannot survive the growing problems of daily needs? In short, inflation goes way beyond the financially able, they hamper them and makes them stay away from expenses or donations that many would see as a big lift towards aiding agencies put up for a cause.

At this rate, we may even see more suffering for these charitable institutions. How can they maintain their charitable ways if they cannot sustain their territories due to the financial crisis? A scary thought indeed and if it does happen, it seems like more people are destined to suffer than to be aided. In the end, it is the people to be blamed as well considering that we all have our own faults in contributing towards world crisis today.

In a survey of eight local safety-net organizations, several said the need for financial and in-kind donations is becoming desperate. Without additional support, they say, severe cuts in services are inevitable and likely will begin in August.

Others – while dealing with a flat financial year, a spike in demand and rising costs – are holding their own. But they’re banking on a benevolent holiday season to keep up.