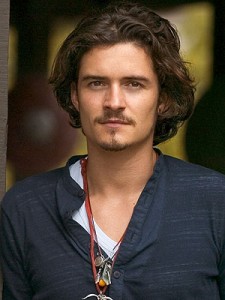 The hunk’s mom, Sonia Copeland Bloom, is moving house, and she wants to clear out her son’s room before she does it. What do moms normally do when this happens? My own parents jammed my stuff into boxes and left them in storage. Some of the stuff, I decided to get and use in my own place. But then again, I am NOT Orlando Bloom. I do not have tons of stuff that I can sell for a hefty price to the countless collectors out there.

This is what the star’s mom is planning on doing. She has already spoken to her son, who has given her permission to do so, with one stipulation: the proceeds of the sale would go to charity. So what can you get your hands on? The Guardian lists some of the items that will be on sale:

Among the items up for grabs are a bodyline wetsuit used by Bloom, 32, when he filmed a scene with Elijah Wood in The Return of the King and a poster signed by the entire cast.

A pair of Moroccan slippers and boots he wore in The Kingdom of Heaven could also entice film buffs.

But fans of Bloom – who now lives in west London – can also get their hands on more personal items such as the badminton and tennis racquets he used as a boy.

Gucci shoes, Puma trainers, polo shirts and a hooded waterproof Gap jacket belonging to the star will also be auctioned.

It will be interesting to see how much this auction will make. The charities that will benefit are Unesco, the New Marlow Theatre, cancer charity Odyssey and the UKC Music Scholarships.