Around the world today, there are people taking on valuable missions on their own to help other people. Some do get publicized a lot while the others don’t get much exposure. But just the same, they continue to pursue their mission with as much help they can get or sometimes through their own personal funds.

One very inspiring man pursuing a unique humanitarian mission is Stevo (Stephen Sumner) of Me & My Mirror.org. He is actively helping less fortunate people with disabilities notably in Southeast Asian countries. His main objective is to ease the suffering of amputees in poor and conflict-prone areas around the globe through the power of the mirror.

Stevo is an amputee himself who rides a cargo bicycle to deliver mirrors to amputees in the villages. The mirrors are no ordinary ones as they are hand-made and created using the acrylic material. His goal is to alleviate the so-called “phantom limb pain” normally experienced by amputees and improve their quality of life amid the depression and ostracizing they get from other members of their community.

Stevo is currently running a crowd fund raising campaign at StartSomeGood.com, he needs to reach the target of $5,000 for all the money to go to helping people in Cambodia who have lost limbs. Please give what you can. 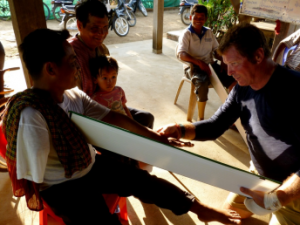 This particular therapy using mirrors was started by VS Ramachandran in the 1990s. Ramachandran is one of the world’s renowned neuroscientists.

The mirror therapy uses a visualization technique that allows a patient to look at a mirror image of his limb in place of the one that was amputated. When this procedure is done regularly at least 10 minutes twice a day for about a month to five weeks, the amputee can be treated and cured for the rest of his life.

The therapy works by helping the brain re-wire and stop sending warning signals that causes the phantom limb pain. In fact, this form of treatment is now being utilized by the U.S. Military, the American Pain Foundation and the American Automobile Association.

Stevo believes that if only the less fortunate people in conflict-torn areas are given the chance to learn about this mirror therapy, many would greatly benefit from it. It is a very cost effective technique in that patients don’t need to buy medicines, visit the doctors or hospitals and travel to the town centers to seek treatment.

Stevo has initially helped amputees in Cambodia where landmines were widely used in the past through his own personal funds. He looks forward to collecting additional funds until February 15 from kind-hearted people to carry on his next mission for three months until May this year. Other Asian countries he plans to visit are Laos, Vietnam, Sri Lanka, India, Indonesia, Haiti and the Balkans among others.

About the author:
Teresa is a freelance blogger and mom of two. She gets inspiration from the success stories of people strongly supporting humanitarian campaigns.