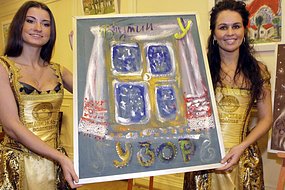 Who would have thought that the former Russian president and current Prime Minister has such a soft side to him? Many of us know him for being a tough politician but this piece of news goes to show that even the toughest of people have hearts and compassion for the less fortunate.

A charity auction is going to be held today in Saint Petersburg, Putin’s hometown. The charity auction is going to feature 28 works of art made by well known celebrities and politicians. The theme is based loosely on Nikolai Gogol’s The Night Before Christmas. As for Putin’s handiwork, it is a painting featuring a yellow window with embroidered curtains flapping in the wind. The scene outside the window is a winter landscape. Putin’s work is titled Uzor (Embroidery).

According to Nadezhda Anfalova, the curator of the exhibit and a painter as well, Putin painted the picture within 15 minutes, without anyone else’s assistance. The proceeds from the sale of the painting – and the other paintings to be auctioned off – will be given to two local children’s hospitals as well as a church that needs to be restored.

We may not be Putins or other celebrities but this is a prime example of the fact that we can all do little things to help those who are less fortunate around us. Perhaps painting and the arts is not your thing but I am sure that if you look hard enough, you will find some way by which you can help out.