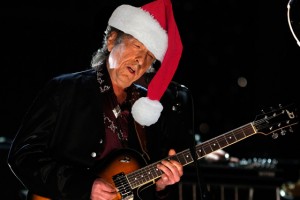 While charity is certainly not only for the rich and famous, they do tend to focus on charitable activities, especially later on in life, don’t they? Take Bob Dylan, for example. He is an icon in the music world and despite the fact that his career has not been that productive in the recent years, he is still widely regarded as one of the best musicians in the world. And of course, his acts of charity are not to be disregarded as well.

The album is titled “Christmas in Your Heart,” and according to reports, it will include Christmas classics such as Here Comes Santa Claus, Winter Wonderland, and Little Drummer Boy. To make things a little more interesting, rumors have been going around that there might be a couple of original Christmas songs written by Dylan himself in the album.

All the sales from Christmas in Your Heart will go to charity. Proceeds from the US version of the album will all go to Feeding America. For the international version, Dylan is still holding talks with a charitable organization that also feeds the needy in the UK and another group that operates in developing countries.