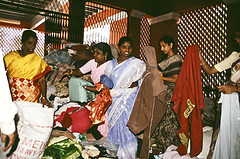 When you give to charitable causes, what do you normally give? Do you prefer giving cash? Or maybe you would rather give in kind?

I remember that, as a kid, my mother would much rather give in kind. Not only did we not have that much spare money, she would also say that it is much better that the people who need things can get the things they actually need. This would also lessen the temptation to use the money on other things that may not be urgent needs. I have come to adopt this way of thinking most of the time.

That is why, when I read an article on Penn Live about donated items becoming less, I felt a tinge of sadness and worry. It got even worse when I read the reason behind this. Apparently, instead of people giving old or used items to charity, people now tend to make use of eBay and other similar venues to get rid of their stuff.

But you know, you can’t really blame them. The economic times are crazy, and even those who were relatively well off are finding themselves in trouble. Who would blame people when they try to make some extra money in most any way they can? At least they are not doing illegal stuff, right?

Still, this is an eye-opener for me, and I hope that it will be the same for you. Perhaps it is time to re-examine our spending and giving habits. Perhaps there are some things that we can afford to give to those in need.