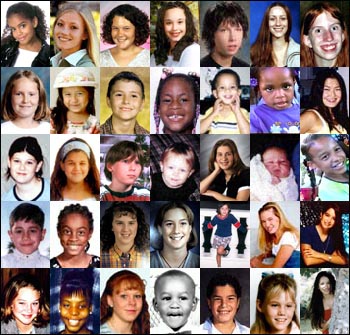 As mentioned in the last post, fighting for children being abused by online pornogaphers is a vital cause we should all be part of. Today, child exploitation on the internet is a sickening MULTI-BILLION dollar industry. Here are some of the grueling facts to be aware of according to data from the National Center for Missing & Exploited Children (NCMEC):

19% of identified offenders had images of children younger than 3

39% had images of children younger than 6

There is also strong evidence of increasing involvement by organized crime and extremist groups.

Children have become a commodity in this insidious crime. While there is no empirical research on the scope of the problem, but there are estimates.

A 2002 report by ECPAT International and the Bangkok Post estimated that 100,000 child-pornography web sites existed on the Internet in 2001.

NCMEC reports that most child pornography consumers and child victims are Americans; however, the financial transactions are increasingly moving offshore.

The International Centre For Missing and Exploited Children, or the IMEC, is a global agency which promotes the well-being and safety of children all over the world though its various programs.

Visit the orginazation’s site to get the latest facts, legislation on the issues as well as ways on how YOU can help end this terrible crimes today.

Nothing makes society put aside its differences than cases of missing and exploited children. Children are some of the most abused and misunderstood in most developing countries that they suffer more than we know. They are exploited as child labor, child warriors, prostitutes or simply victims of bad economic planning that allots enough resources for their future and development. The Lost Childrens Network, is a group of several non-profit charities who focus on the problem and try to alleviate some of the indignities children suffer all over the globe.

Recent statistics have shown that the use of children as child soldiers (mainly in Africa where the number of misguided children has grown to such extent that they are viewed as a resource for war) with their views of society and culture tainted with hatred, lust for power and the satisfaction of doing a good job for their war lords. These children, products of the Aids epidemic have little or no parenting supervision having fallen to conflict themselves as either victims or participants in the never-ending ethnic-cleansing that is currently sweeping the nation.

The group aims to inform people all over the world about the plight of these lost and misguided children in hopes of making the future brighter for them. They are also engaged in the search for kidnapped or literally lost children who have disappeared from their residences or while on tour abroad. These cases have increased in these past few years due to the more relaxed approach people have with regards to the time they append with their families, taking their children with them in hopes of regaining the lost time they spend at work with the time they spend on vacation. In the Democratic Republic of Congo, there is an estimated 15,000 soldiers that fall under the age of 18 with some as young as eight according to the BBC. In conjunction with the many charities and non-profit groups who aim to alleviate the suffering of children they are changing lives even if does not encompass the globe. Let us all help in their drive to help children wherever they may be on this earth for a brighter future which they can call theirs.

Child pornography and expoitation online is a growing global problem. And if you have children, the facts are more than just shocking and deeply disturbing. They’ll actually make you want to cry, vomit, or both. And it will make you want to do something.

I recently read an article in Readers Digest about how a lone cop created one of the largest online child pornography investigative units in the world. He dedication to fight the heinous crimes of internet child abusers was admirable, and brought about when he saw online photos of a 4-year-old girl being abused in the most horrifying ways. He later caught the perpetrator and continues his fight today.

Today, I received this email, asking me to “Light a Candle” for the innocent victims of internet child abusers. I immediately visited the site called Light A Million Candles, and lit my candle, which was the 735,612th. The site, which is part of the International Center For Missing and Exploited Children (which I’ll talk about in my next post), hopes to get the attention of the big guys (governments, politicians, financial institutions, ISP’s, tech companies and law enforcement agancies) to STOP making this horrendous practice such a viable commercial venture online, which destroys thousands of innocent children‘s lives. They don’t ask for money, they just ask that you lend your voice to support this exemplary cause.

The petition hopes to light one million candles by December 2006. Help STOP this evil practice and LIGHT A CANDLE NOW.