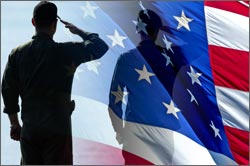 This kind of news makes me mad; steaming mad. There are so many people who are less fortunate than the average person. And there are few enough people who are willing to help them out. Then these unscrupulous people or groups of people try to take advantage of those who have giving hearts. I think that there’s a special place in hell for people like them

Anyhow, the reason for the mini rant is this piece of news I read at The Miami Herald. Apparently, there are those who engage in fraudulent activities, trying to collect money in behalf of military veterans, police, and firefighters. According to the report:

The Florida attorney general on Wednesday joined a national effort to fight fraud committed by groups claiming to collect money on behalf of protection agencies and veterans, but they give misleading information about how much of the money would actually be given to those groups.

”Operation False Charity” includes 76 actions against 32 fundraising companies, 31 individuals and 22 nonprofits — or groups claiming to be nonprofits. The effort is led by the Federal Trade Commission, and attorneys general, secretaries of state and other law enforcers in 48 states and the District of Columbia.

You know what’s worse? Some of these groups are actually REAL charities. The problem is that the money that they collect do not ALL go to the causes that they are supposed to champion. While that is not wrong or uncommon in itself, people are misled and majority of the money goes to administration costs, which includes wages of those who work in the organizations.

For more information, get in touch with the FTC.

Many feel frustrated at news that the government is still refusing some of the best agencies and their staff to enter the country to do proper relief work on behalf of the suffering people of Myanmar. Citizens in the capital have been trying to take supplies they can get to areas that need it but even they say that they can only do so much. Donations are flooding in from all over the world but aid agencies are raising a warning for those who want to donate cash through online charities. There is very little in terms of funds and materials that are getting into the country that many criminals may jump onto the donation bandwagon to get an easy buck. Try to donate only with legitimate aid agencies like the UN and other widely accepted charities. As we have said, it is better to send money to those who could put it to good use in helping the people of Myanmar and not into the pockets of these lowly criminals.
Channel donations in terms of cash and materials through the Charity Navigator which has a list of the most reputable agencies. Also, when helping by donating, indicate if you’d want the cash to be spent totally in relief efforts to a specific location or for general use. If a donation has no specifics, the aid agency has the ability to keep it in funds that accumulate and are used in case of disasters, or they can be poured directly into the country or specific area you want to help.
We simply cannot fathom the greed of such people who for a small amount of money deprive those in need who are dying and suffering in those far away, ands without food and water. May you get the heart to return or at least send the money to the rightful people who can make an impact and help people and remember that you might yourself need help from people who are generous and don’t have second thoughts when people and lives are at stake.