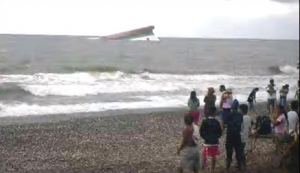 It has been over a month now and to this day, nothing striking has been reported on the MV Princess of the Stars tragedy that occurred in Romblon, Philippines. With thousands of lives that perished no thanks to Typhoon Franks, relatives had to console themselves with P200,000.00 in exchange for the lives of their loved ones that sank with this vessel.

The thing you have to hate about this is that the vessel, the MV Princess of the Stars is still out there overturned with bodies floating all over perhaps decaying by now. Apparently there are further issues to resolve such as the celebrated chemicals that were on board the ship that can lead to an outbreak of diseases and contamination if the rescuers are not careful.

Already affected are the fish and sea creatures that are being sold in the area as the increasing fear of contaminated fish or sea shell food is a possibility. With that in mind, one can just imagine the impact that this tragedy has given to the local folks of Romblon and how the livelihood of nearby towns are being affected as well.

Rather than focusing on how to resolve the issue, the people behind the vessel, Sulpicio Lines continues to face the raps being hurled their way. Political parties in the Philippines are having a heyday frying the vessel owners and while they are doing that, family members of the victims on board continue to wait.

Even worse, it is the rainy season. While the vessel has not been completely taken out, there are more storms headed the way of the Philippines. More delays are sure to ensue and perhaps make the situation grow worse.