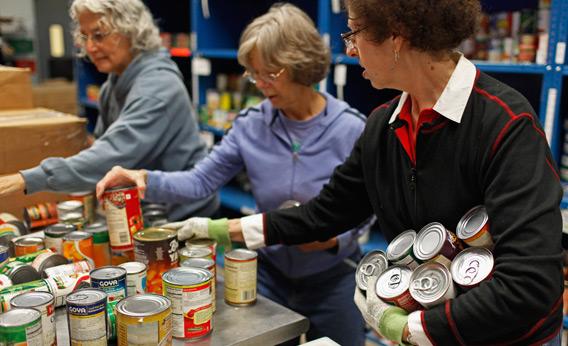 With the economy treating so many people roughly these days, there are a lot of families who could use a helping hand. Food, clothing, and other general use items are at the top of the list of things impoverished families tend to need. Also, by cleaning out your closet of unwanted wears, you will be making additional room for those designer furs you always wanted. As you take a look through your pantry, canned and boxed food items are generally the most useful items to donate. these items generally have a longer storage life than the food in your refrigerator. They are often the easiest for poor and homeless people to store — especially if a person does not have a refrigerator of their own. Although that is hard for some to imagine in our modern age, it is a situation that is more common than people might expect.

Giving to Churches and Food Banks

A lot of people would like to get involved, providing food items to the poor and needy, but are not sure where to begin. Generally, the poor and homeless obtain their food from shelters, food banks, and churches. In some cases, food that makes it into these centers is derived from the USDA surplus and other food redistribution projects. Though the redistribution of food from such sources is helpful, it generally does not satisfy the great need that exists. Most food pantries and food bank services still rely on other community members to donate to their cause, which helps to support the many efforts made to keep economically challenged people fed. If you have ever wondered how great the hunger problem in America truly is, according to the Feeding America website, approximately 49-million Americans struggle to obtain adequate food each day.

Typically, churches and food banks also help the poor and needy by taking clothing as well. It is generally a good rule of thumb to call ahead to a donation center to find out not only what sort of items they are prepared to take, but also what types of items they most desperately need. In the case of clothing, generally many places that take clothing do not want ripped or stained items. As a rule, if the clothing items you want to donate end up not being suitable to wear, then it is best to not donate them. Giving these centers items that they will not be able to use is more of a hindrance than a help to their cause. Better quality clothing donations will inevitably help many poor and needy individuals to acquire the clothing necessary to gain employment. Consequently, if you can spare a clean shirt or nice pair of slacks, such a donation is often more functional for those needing interview clothes.

Sometimes one of the best ways to help out the poor and homeless is by donating a few hours of your time. Many churches and food banks operate in an under-staffed capacity. This means that it is difficult for them to efficiently help the people who depend on them the most. This is where volunteers come in handy. Whether you are arranging clothing or bagging food, the time you donate helps to keep efforts moving along smoothly. It can give you a sense of genuine pride, knowing that you have helped others in your community.