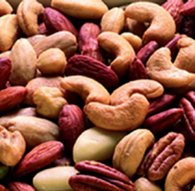 One family who has taken this to heart is the family of Fran Taylor. They have a booth in the Columbus Leigh Mall where people buy all sorts of nutty treats. Little do the people buying know that the money they spend on chocolate covered almonds and cinnamon pecans goes to charity.

Fran Taylor has been a philanthropist says she has been an avid philanthropist all her life. She comes from a poor background so she knows the needs. She has owned Lancaster Income Tax and Book keeping for the last 40 years and that is her main source of income. She, her husband Dan, and her daughter and son-in-law, Vicky and Gary Stovall operate the Taylor Made Nuts booth simply to raise funds for the various charities that they get involved in.