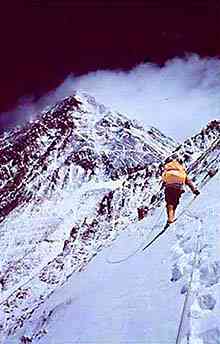 In the UK, a new way to give to charity has been buzzing in the headlines, giving dangerously, that is.

We’re talking about “The Charity Challenge“, which is like a travel/tour operator with a unique twist – it gives people the chance to have a large-scale adventure holiday and at the same time, organizes it so that your holiday raises money for charity. Think of climbing Mount Everest or following an Inca trail in deepest Peru – terribly exciting and death-defying stuff, and you get to help others too along the way.

Actually, the unusual concept has been around for the past 15 years, established in 1991 by Erich Reich, who used to be a Director at Thomas Cook. He first got the idea when he was asked by a friend to help raise funds for a Children‘s Home in London. Reich rode for 400 kilometers in the Middle Easters desert and was inspired ever since.

His company, Classic Tours, has been booming ever since and leads as the world’s largest “Challenge Operator”. Just this year, the company will be taking over 3,000 participants on high-adrenalin challenges all over the world – from Brazil to Mongolia.

“Since 1991 we have helped approximately 120 charities raise something in the order of Ł32m, and that’s net, not gross.” Reich explains.

So how does it work?

“We then organise everything, from flights and accommodation to logistical support on the ground. On charity bike rides, for example, we have our own teams of mechanics. In the developing world, we even supply our own medics.

The nature of the challenge is very individual, some people have never camped before so for them it can be a challenge just to go to the loo behind a rock.”

Even though we’re a tour operator, no money comes directly to us from clients. We give the charity a cost per individual for the services on the ground and they pay us in turn,” says Reich.