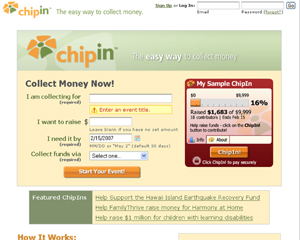 Everybody has a charity that they would like to sponsor. You might want to get more people to donate to your local cancer organization or to your disaster relief efforts. There are hundreds and thousands of people who need help everyday.

While the most effective tool for most is still the face to face request for help, it makes sense to let technology work for you and the groups that you’d like to get help to. This is where this handy little tool comes in called ChipIn.

ChipIn is a flash application that you can add to your website or blog. This widget allows visitors to your site see what charity you sponsor. From your site, they can donate to your cause using Papypal or a major credit card. All of you will be able to see how much progress you’ve made towards meeting your goal. The best part, it is purely voluntary for everyone – no pressure.

ChipIn definitely works with myspace, Blogger, Xanga, typepad, wordpress, Google and netvibes. So don’t hesitate and get your blog – and social network earning for your favorite cause.