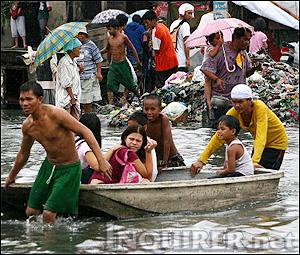 Can you imagine a place where it is practically like Waterworld? Well there is such a place in the Philippines. It is near the borders of Malabon and Navotas, two of the low areas where floods are sure to rise whenever the strong rains come in.

Normally, floods can die down after a couple of weeks after the rains have stopped. But it is really hard to believe that there are places that go through practically a year barely above water. For most of the residents in Malabon and Navotas, the site is something that really needs the attention of the local government considering that not only is it uncomfortable, it is entirely a health risk location as well.

But this place is not always that flooded. There was a time when people there could walk around and play ball even. However today, rafts are the common site to bring people to and from dry land. And with the series of rains hitting the area, it is not helping at all.

There is no doubt that among the causes for floods are the problematic issues of garbage and total disregard of the infrastructure of this place. But while that is already a given, should that allow the Philippine government from disregarding the welfare of these people? They are no different from the common ones living in the country today and apparently something has to be done. Calling President Gloria Macapagal-Arroyo, are you listening? It was in the news last night!