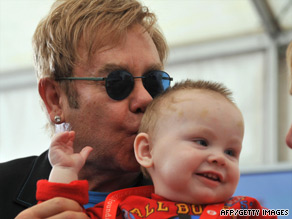 On the one hand, the children being adopted by celebrities are given another shot at life – a much better shot, actually. On the other hand, celebrity adoptions may be sending out the wrong message. This is what the charitable organization EveryChild is concerned about.

The recent news that musician Elton John is planning to adopt a 14-month-old boy from a Ukrainian orphanage is the root of the charity’s sentiments. Elton John has been active in helping raise awareness for infants who are infected with HIV. His recent visit to the Ukraine is part of his efforts.

While he has always considered adoption, he said that he had concerns about it as he is not exactly a spring chicken and his career is not exactly the perfect setting for raising a child as well. However, when he laid his eyes on Lev, the baby boy, and interacted with him, Sir Elton John said that he changed his mind.

Now back to the concern of EveryChild…according to James Georgalakis, EveryChild’s Communications and Advocacy Manager, people in developing countries might get the wrong message from all these celebrity adoptions. He told CNN that:

“Research conducted in the Ukraine in 2007 which showed high-profile celebrity adoptions and news around foreigners coming into the country and adopting children generally was actually encouraging vulnerable young mothers to abandon their children into homes hoping their child would be adopted by a rich foreigner and have a better life. So it’s quite well documented that these high-profile adoptions could actually be increasing the number of children in institutions.”

Having read that information, I do see the point that EveryChild is concerned about. However, limiting or disallowing celebrity adoptions may not be the solution. What do you think? Should celebrity adoptions be restricted or is there another way to approach the issue?